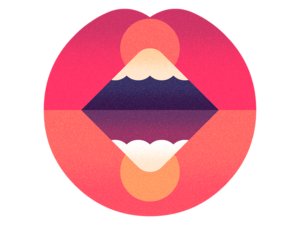 This article showed up in the Vasta’s Voices Facebook group, and I’ve been ruminating over how (or whether) I should respond to it.  I mean, it’s just a fluffy little article for people to toss back and forth on Facebook. I really shouldn’t get worked up about it.
But I am. I’m a little worked up.  And as I re-read the article I realized that it isn’t just the usual imprecision, and sensationalism that bothers me –the title of the blog where this story appears is “Facts So Romantic” so I shouldn’t be surprised    — What really turns my crank is the fundamental premise that the sounds of a language (language phonology as well as accent varieties) spring from the physical environment of its speakers.
Let’s ignore the article itself for the moment, and try to get at what Maddieson and Coupé are proposing.

Very simply, they are pointing to a correlation between ecological environment and the ratio of consonants and vowels in the languages spoken by people in that environment. They propose that the sound structure of these languages was influenced by the acoustic environment. Specifically, they suggest that languages spoken in warm, humid, tree covered places have adapted to use more vowels and fewer consonants because vowels are more faithfully transmitted than consonants in such environments .
Of course, this is a simplification. You can read the abstract of their talk here.

I think there are many problems with their approach and with their conclusions, but rather than state them here, I suggest you take a look at this post from Language Log, one of a very few blogs where reading the comments is actually an illuminating experience. One commenter links to this article which does an excellent job of explaining the pitfalls of arguments based on statistical correlation.
But there’s something more to my response than simple frustration with science reporting, or quibbles with Maddieson and Coupé’s methodology. The reason I find the article upsetting is that it reawakens, and attempts to provide scientific legitimacy to, a cultural trope that I find odious and dangerous: That our attitudes about a particular cultural group might be supported by some objective physical reality, or worse, some essential character trait of the people. The author of the article walks right up to that line in the opening paragraphs:

One might say Hawaiian sounds a lot like the sea that surrounds it; the bulk of its words are simple and spare, flowing smoothly from vowel to vowel. Mahalo.
On the opposite end of the spectrum, we have German. With its 30-letter alphabet, clipped consonants, and “uvulars”—sounds made by constricting the tongue against the back wall of the throat—German is famously harsh and guttural. Auf Wiedersehen! One might say—if one weren’t German, that is—that the language is cold and craggy, just like the country.

Just imagine if the positive and negative characterizations were reversed:

One might say that Hawaiian sounds a lot like the sea, directionless and unfocused, meandering over barren lifeless rock that makes up its remote inhospitable islands. Wikiwiki
On the opposite end of the spectrum, we have German. With its impressively complex 30-letter alphabet, and high capacity for carrying precise meaning. One might say that the language is as beautiful and as meticulously crafted as a BMW.

I’m not saying that we can’t characterize the sound texture of a language or accent. Obviously there are differences in the characteristics of languages, and we have the tools to describe those differences accurately. Actors and speech teachers should be particularly sensitive and attentive to the iconicity and feel of language. The impressions we draw from the form of language are real and valuable. Language is, after all, a performance of culture, and we should be trying to grapple with how language means. But when we start down the road of describing language features as expressions of a particular immutable cultural reality we can very easily get drawn away from the path of description and respectful attention to the language we’re observing, and into a kind of reductive shorthand that unconsciously reiterates social judgements that we’ve tacitly accepted.
I know that the idea of a relationship between the physical environment and the sounds in the speech of the people who live there is very appealing to speech teachers, and I think I understand why. We want to understand speech as part of embodied human experience, a style of expression that reflects the totality of a person and the world that they’re connected to. I think that’s deeply right, and I honor that impulse. As Pablo Neruda says in his poem Verbo:

Poetry is properly a part of how we think about accents, and it makes a powerful kind of sense to our poetic minds to think of human culture (language being part of that culture) as part of the lived environment. When we’re told that language scientists can demonstrate this connection, it can seem like a confirmation of all of our intuitions.
I don’t think it is.