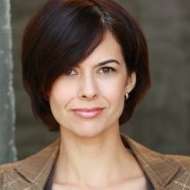 Nancy Bell
Nancy is a transplant to St. Louis from Los Angeles, where she had been living and working as an actress for 13 years. New York theatre credits include work onstage at Manhattan Theatre Club, New York Theatre Workshop, Ensemble Studio Theatre, Tribeca Lab and elsewhere. She has worked in regional theaters all over the country, including Berkeley Repertory, Geffen Playhouse, Pasadena Playhouse, Hartford Stage Company, The Old Globe, Dallas Theatre Center, McCarter Theatre, Baltimore Center Stage, Cincinnati Playhouse, and ACT, among many others. Most recently, she appeared in the Rep Theatre St. Louis’ world premiere of Rebecca Gilman’s Soups, Stews, and Casseroles: 1976. On TV, she portrayed the role of Susan Bates on the long-running soap opera, Guilding Light. Other television credits include: Numbers,The Medium, Huff, The Bold and the Beautiful, Law and Order, Law and Order SVU, Star Trek Voyager, Chicago Hope, Mad About You, and NewsRadio, among others. As a playwright, two of her one acts, Venus and Never Wake a Sleeping Marine, both based on original research and interviews of Iraq veterans and their families, were produced at California Repertory Theatre in Long Beach, California. Her full-length play, Venus was a finalist for the Next Generation Playwriting Prize 2012. Her one act with Peter Grandbois, Present Tense, was one of the winners of the 2013 year's LaBute New Play Festival. Nancy has written three plays for Shakespeare Festival St. Louis’ Shakespeare in the Streets project: The New World, Old Hearts Fresh, and Good in Everything. She is the playwright in residence at Shakespeare Festival St. Louis, 2014-2016 Nancy Bell is Assistant Professor of Theatre at Saint Louis University, where she both directs and teaches acting, voice and speech.
This user account status is Approved
About About
Posts Posts
Comments Comments

This user has not added any information to their profile yet.